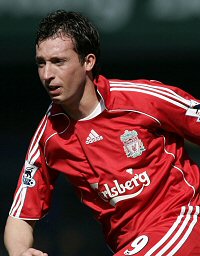 We recently reported that Premiership legend and Scouse deity, Robbie Fowler, was having trouble finding a new club to ply his goal-poaching trade. Well it seems all is not completely lost, or maybe it is, as lowly League One club, Port Vale, have made a cheeky attempt to sign his services.
We would have thought there would be more chance of his famous namesake and Port Vale shareholder, Robbie ‘fat dancer’ Williams, playing against the likes of Yeovil and Cheltenham next season. But, chairman Bill Bratt is holding on to a romantic hope that money isn’t a big issue for a player with his own property empire.
“We obviously can’t afford to pay him what other clubs can but he’s a very wealthy man anyway and we hope he may want to play for the pleasure of it,” he optimistically stated.