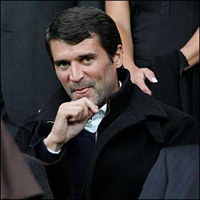 Our question asking whether footballers are under the thumb seems to have been answered by that eternal fountain of testosterone himself, Roy Keane.
The Sunderland manager has missed out on a few signings this summer and has launched one of his infamous tirades in the direction of â€˜weak and softâ€™ players who are dictated by their WAGs.
‘I think it’s weak. You see it with a couple of big players now. Clearly their wives and girlfriends are running their lives and that’s a bad sign.

‘Retire at 35 or 36, you can live wherever you bloody well like — London, Monaco, wherever — and any half-decent footballer will be a multi-millionaire anyway,â€™ he ranted.
The fiery manager also suggested that the only reason that a player would move to a smaller London club ahead of the North East is â€˜clearly because of the shopsâ€™.
Is Keano just chewing on sour grapes? Or are players really more worried about keeping ‘er indoors happy by moving within free delivery distance of Harvey Nichols?