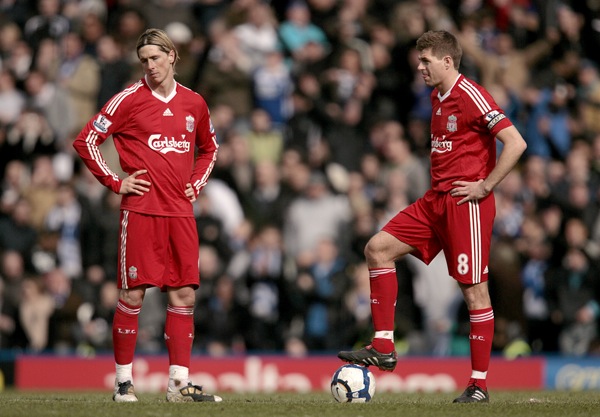 An Anfield insider tells me that Liverpool’s dressing-room leaders – Steven Gerrard and Jamie Carragher, in case you didn’t know – are fast losing faith in Fernando Torres.

Sky Sports pundit Jamie Redknapp, who claims to be a big fan of Torres, described Nando’s admittedly lethargic display at Birmingham City on Sunday as ‘terrible’ and ‘diabolical’, and it seems there’s a growing feeling that the Spaniard has fallen out of love with Liverpool, if not the fans who adore him. He was pretty rubbish at St Andrews, appearing like a man going through the motions, and with some reluctance to even do that – Torres doesn’t smile much these days, does he; his body language is obviously that of a discontented man.

In defence of Torres, he signed for what he thought was a much bigger club than Atletico Madrid (Liverpool were sold to him and his people as the Barcelona or Real Madrid of England – that went well, eh) and in 2007 perhaps that was true of Liverpool – but the fact is, he has ended up at another second-tier club, trying to win games almost on his own (along with Gerrard, of course). Torres came to Liverpool to win things and further his career, not to be the leader of a team struggling to qualify for Europe, as he was for Atleti. Back to square one then.

In the light of his undoubted ability, Torres is refreshingly free of Zlatanesque ego, and I think it’s very harsh to criticise a player who has given more than his pound of flesh to the Kop. But I suspect he’s still pissed off that he was injured during the summer transfer window, and so couldn’t get a move away from Anfield.