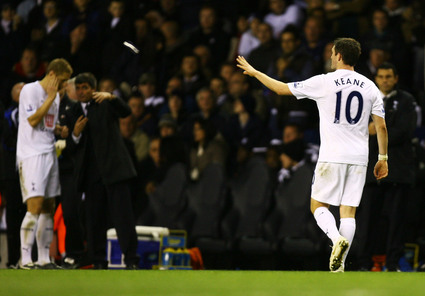 Scenario 1 Robbie Keane was sent off for a clumsy tackle that warranted a yellow. Keane is a mouthy sod, always in the ear of any ref, but he is not a dirty player. (Watch the incident here)
Scenario 2 El Hadji Diouf was shown a yellow â€“Â which he protested against, like the spit-happy muppet that he is â€“ for an X-rated tackle on Alvaro Arbeloa that deserved a straight red. Can’t find a vid of it yet, but if you haven’t seen it, trust me, it was awful.
Just another Prem weekend riddled with reffing inconsistency. I hope the FA looks at both incidents and comes to the conclusion that any fan already has â€“Â Keane’s card should be downgraded to yellow, and Diouf should pick up a three-match ban (at least) for his disgusting over-the-top tackle. The Prem would be a better place without his sort, it really would.