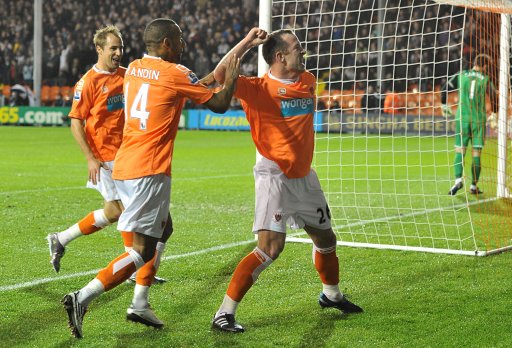 Blackpool manager Ian Holloway has conceded that he has almost no hope of holding on to influential midfielder Charlie Adam come January, with an ongoing legal dispute meaning that the Seasiders’ captain may be able to walk out of the club on a free transfer at the turn of the year.

Holloway, speaking after his side’s lively 2-2 draw with Everton on Saturday, made these mouth noises:

“As long as Charlie keeps his mind on football – which he will do as he loves playing – and I keep picking him because he trusts me, then there’s not going to a problem. Whatever happens, happens. It’s out of my hands.

“There will be a time when Charlie needs to go – unless we’re in a position where Charlie should play – which I think is one of the top four teams.

“I honestly believe he is that good. I think one of [the clubs linked with him] will buy him one day. If not they might nick him, because we have a bit of a technicality – if that happens, what can I do? Nothing, so we get on with it.”

Ollie also admitted that he believes many of his players are being underpaid for their efforts this season and, as Blackpool can’t afford to match their Premier League rivals in terms of wages, he won’t stand in his players’ way should they receive better offers elsewhere:

“I’ve got some brilliant players, I want them to be successful, and being successful is looking after your family and earning the right amount of money your play deserves. If I can’t give them that, then they’ll go with my blessing.”