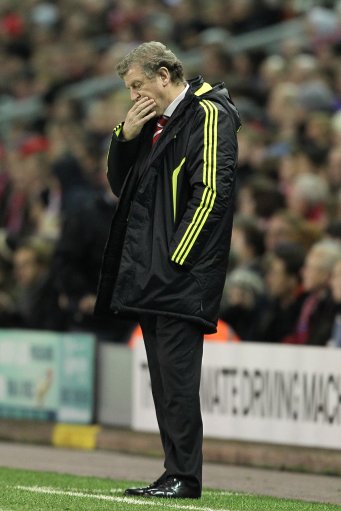 “I wonder if Jonathan Greening’s back on the market yet?”

Liverpool manager Roy Hodgson has confirmed that he will be allowed access to NESV’s coinpurse come the turn of the year, and that he is looking to mirror Harry Redknapp‘s ‘gung-ho’ approach to squad assembly by making several January signings to help mould the Reds in his image.

“It is starting to feel more like my side, but it is still a team that I have not put together. I want to make that clear. I took the team over and I have not made that many changes.

“I brought in (Paul) Konchesky to play left-back, Raul Meireles to replace (Javier) Mascherano and Joe Cole came in at the same time as me as well as Christian Poulsen. The other players I have inherited.

“I think I would be a good comparison with Tottenham because Harry Redknapp came in there just as I came into Fulham, so he will just be completing three years and he has brought in a lot of players.

“I am more than happy to take responsibility for this squad but it takes a coach more than five or six months to make his stamp on a club.

“I am hoping we will do some good business in transfer windows to come and then I will be able say, ‘If you don’t like it then I have no one to blame but myself’.”

So, who do you think will be the runners and riders in question? My shouts are as follows:

Lukas Podolski – Why the hell not? Podolski endured a bit of stinker with Köln last season although, admittedly, he’s had a better time of it so far this campaign. That said, with various reports of unrest continuing to surface, maybe the prospect of a rejuvenating move to the Premier League would entice ‘RVP-lite’ to Anfield?

Clint Dempsey – If Pies’ sources are to be believed (which they invariably aren’t), a move for Woy’s former Fulham charge may be a foregone conclusion.

Lassana Diarra – Would probably need to see a couple of ‘big names’ bought beforehand to convince him that a ‘step down’ from Real Madrid to Liverpool would be tolerable for a man with his over-inflated personal standards.

Yann M’Vila – Failing a move for Lass, Liverpool should definitely go all out in a bid to acquire this young Frenchman’s holding midfield services. The Rennes anchor has buckets of potential.

Danny Simpson – All I’m saying is, there is ‘word on the wire’.