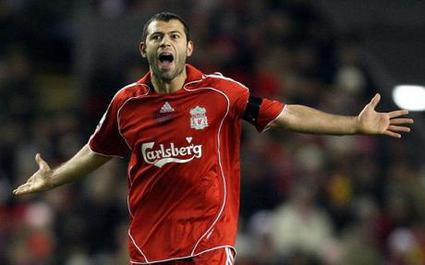 Somebody stop this man leaving Anfield
Most Liverpool fans know that Mascherano is essential to their team. The Argentine’s unselfish play is not only vital in protecting Liverpool’s back four, it also liberates his fellow midfielders – especially Steven Gerrard and Xabi Alonso. No wonder Rafa has warned other clubs off his brilliant water carrier.
But it seems Maschy is hot for Barcelona, which is worrying news indeed for all at Anfield. This from the Guardian:

“Mascherano’s agent, Walter Tamer, met Barcelona representatives in the city’s Rey Juan Carlos I hotel for two hours last night as the European champions intensify efforts to sign the 25-year-old. It is believed Tamer, who last week claimed Mascherano would relish a move to Barcelona and that “a transfer would be feasible”, was seeking assurances about the personal terms on offer should his client attempt to force through a deeply unpopular exit from Anfield.”

Gulp. I’m usually sceptical of any transfer rumours, but there seems to be more than a grain of truth in this case.
Rafa countered with typical intransigence:

“Mascherano has no price. Barcelona could not afford to match his value. They can offer Â£40m or even Â£50m. We don’t want to sell.”

Hear that, you Catalan weasels!? Rafa said no, and Rafa means no. No no no.
I wouldn’t be surprised if Maschy’s agent was behind this, with a juicy cut of a potential deal to Barca uppermost in his mind. Most agents are sly dogs, after all.
And while I don’t doubt that Barca would love to sign Macherano, I think they’ll walk away. They already have Sergi Busquets and Yaya TourÃ©, so Maschy is not a piriority signing.