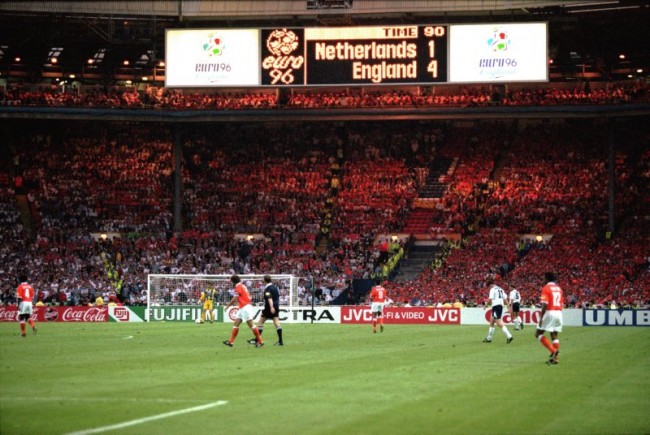 1996 was a fine year for humanity. The Cable Guy hit the cinemas and showed us all just what was truly possible, the IRA bombed the Arndale centre, millions of people the world over began finding that Ask Jeeves ‘preferred the term jovial’ and Mark Morrison warned us all about the imminent Return of the Mac (despite no-one realising he’d been away) before being jailed for hiring a ringer to do a bout of community service. They were heady times indeed.

[Interesting Mark Morrison fact-ette: Kevin Campbell – yes, that Kevin Campbell – once legally blocked him from releasing an album. Thank you Kevin. On the behalf of all mankind, thank you.]

However, before all that came England vs Holland in the groups. With both sides level at the top of Group A going into the game, England pulled an amazing performance out of their hind-quarters at Wembley to hammer a Dutch side boasting the likes of Bergkamp, Van der Sar, the De Boer twins, Seedorf and Jordi Cruyff – with El Tel’s S.A.S (‘Shearer and Sheringham’ for the uninitiated) strike force grabbing two goals apiece. Hell, they were so good they even let Patrick Kluivert score a 78th-minute gimme to send Scotland packing into the bargain.

With England welcoming Holland to Wembley again tonight, we thought we’d trawl the photo archives and relive the day – 18th June 1996 – in all it’s technicolour glory…

Of course it’s just like the English to go dredging up fading, inconsequential victories from the mists of time every time a repeat fixture comes up and long after the vanquished opponents of yesteryear have stopped caring (Germany 1-5 England being a case in point) but, hey, it’s all we’ve got.