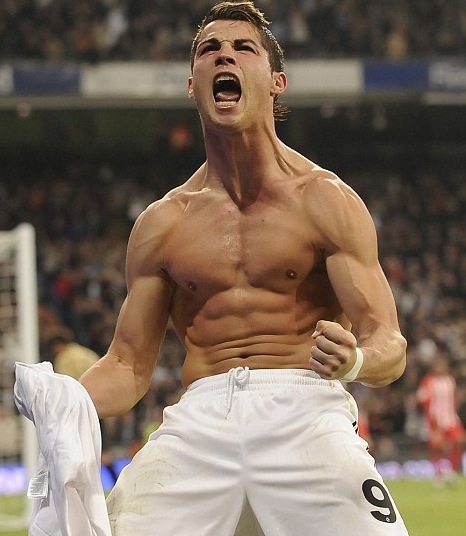 So it looks like Cristiano has been hitting the gym HARD since he moved to Spain. There’s talk that he’s crunching 3,000 sit-ups a DAY, which is suggestive of a) a man whose body is a temple, or, b) Obsessive Compulsive Disorder.

C-Ron paid for his vanity at the weekend when he was booked for taking his shirt off after scoring for Real against Almeria. Fair enough. If I was stacked like this, I’d also want to take off my shirt at every available opportunity, and damn the consequences. But I’m more of an Andy Reid body type.

Having been booked for the flesh flash in the second half, Ron was sent off five minutes later, after he picked up a second yellow for this petulant kick:

Oh, and he missed a penalty too.

“He looks like a proper buftie. I probably would though.”