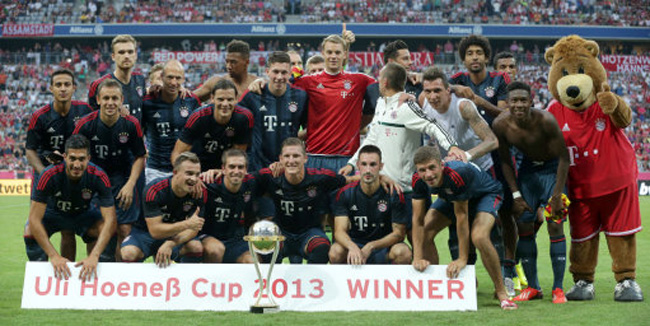 Ahead of the impending arrival of Gerardo Martino to the Barcelona hot-seat, coach Jordi Roura took charge of the Catalan giants in this glitzy friendly against the European champions at the Allianz Arena. Facing him was former Barca supremo Pep Guardiola, who would ultimately see his new Bayern Munich side win 2-0.

While Guardiola chose a very strong first 11, his opposite number put out a mainly second-string side, with superstars such as Lional Messi peppering the below-strength side. While in the second-half, both managers made a truck load of subs in predictable pre-seasons style.

The goals came from the consistently outstanding Philipp Lahm early on and striker Mario Mandzukic towards the end.

Here’s how the sides lined up –

The may have rested a whole host of superstars, but if Barca are to regain their place at the top of the European tree in the coming season, they’ll have to knock a superb Bayern side off their perch, Guardiola and all. And that may prove impossible, even for Los Blaugranes.