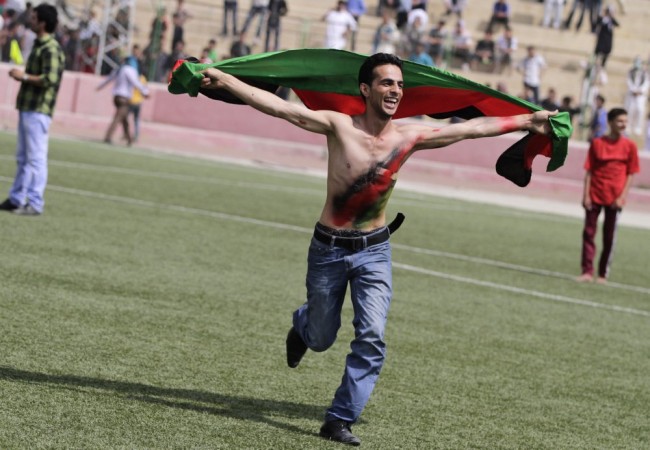 Having hosted Afghanistan’s first international game for ten years at the tail-end of last month (a friendly against Pakistan), the Olympic Stadium in Kabul was once again full to the brim yesterday afternoon as thousands of ecstatic fans swarmed in and around the ground to welcome back their national side, who were returning from Nepal having notched up a shock 2-0 win over defending champions India in the final of the South Asia Football Federation Cup to win their first ever international football tournament.

Indeed, their achievement was so momentous that Afghan president, Hamid Karzai, traveled by convoy through the thronging city streets to Kabul airport in order to personally welcome each player home.

The last time the Olympic Stadium drew such crowds was for the Taliban’s regular public executions. Attendance was mandatory. Indeed, during the Taliban’s reign, Afghanistan’s football team was withdrawn from international competition and disbanded completely as the game itself was banned throughout the war-torn country.

As you can imagine, the catharsis was palpable as Afghan fans celebrated long into the night having watched the match on two giant TV screens erected in the centre of Kabul, with celebratory AK-47 tracer rounds illuminating the sky for half-an-hour after the final whistle.

Not just any old trophy, then…

Here’s a video of what appears to be the whole match, but skip through to the 2:09:54 mark to see how the rapturous Afghan celebrations went down in Katmandu at the final whistle…