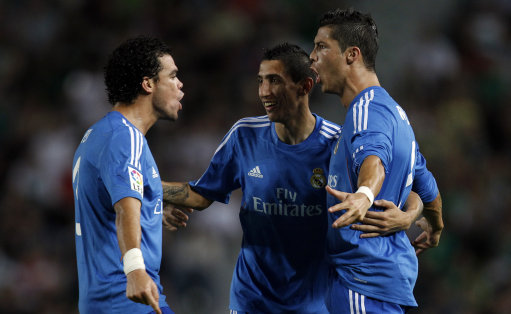 With the score level at 1-1 and injury time fast wicking away, Real Madrid had to resort to drastic measures to rack up a late victory over newly-promoted Elche when Pepe did what Pepe does best in the 94th minute of the game (despite the referee only adding three minutes on in the first place): hauling defender Carlos Sanchez down on top of himself in the area to engineer himself a decidedly dodgy penalty.

Cristiano Ronaldo duly thrashed it home in the 96th minute to score his second goal of the night and snatch victory from the jaws of stalemate for Real, while stoking the embers for Ian Holloway-esque conspiracy theorists around the world in the process..

Indeed, many Elche fans (around 120 to be specific) were so outraged at the preferential treatment Real received on the night that they Tweeted the Spanish police force to complain, with the main bone of contention seeming to be that Elche picked up 12 bookings while only two Real players were cautioned over the course of the game.

“We have received more than 120 mentions about football in the last 10 minutes…Remember, we try to help you about SAFETY… :-)”

(Tip of the hat to Dirty Tackle)