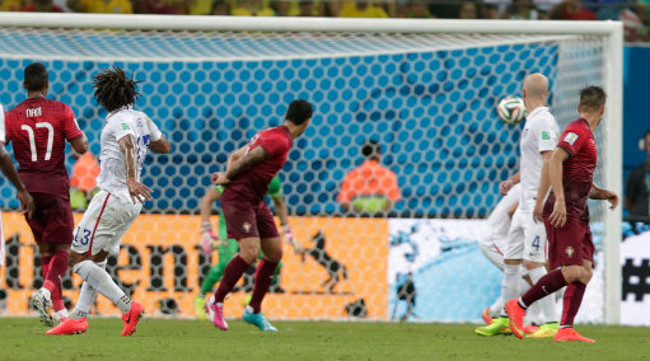 A piece of magic from Cristiano Ronaldo at the end of this pulsating clash saved Portugal from an untimely exit at the World Cup. With the USA deservedly 2-1 up the Real Madrid superstar whipped in a superb cross which was duly headed home by sub Silvestre Varela.

Man Utd’s out-of-favour wideman Nani had opened the scoring after just five minutes but the USA stayed in the game and created a number of chances to level the score. However, it took until just after the hour-mark for Jermaine Jones to unleash a superb long-range effort which sent the US fans wild. And then, on 81 minutes Clint Dempsey bundled the ball home to put Jurgen Klinsmann’s charges on the verge of qualifying for the knockout stages with a game in hand. But after after failing to keep hold of the ball and wind down the clock, the USA were hit with a sucker punch courtesy of Ronaldo and Varela.

It’s all still to play for in Group G.