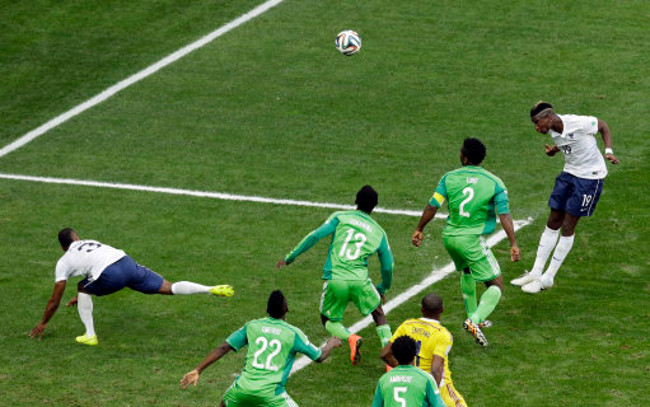 Two goals in the last 11 minutes gave France a victory against Nigeria which puts them into the last eight of the World Cup.

For long periods of the game it was the Africans who looked sharper and more likely to score, with Emmanuel Emenike having a goal flagged offside in the first period. However, with Karim Benzema dropping into a central role in the second-half after Olivier Giroud had struggled to make an impact, the French improved and ultimately a jaded Nigerian side conceded late on.  Although the French really should’ve gone down to 10 men when Blaise Matuidi launched a horror challenge on Ogenyi Onazi which saw the Lazio man leave the field on a stretcher.

On 79 minutes, Paul Pogba was the goal-hero for Les Bleus, heading home after the usually dependable Vincent Enyeama misjudged a cross. And then, on 90 minutes former Eveton man Joseph Yobo put through his own net to seal the deal for Didier Deschamps’ men.

France now face Germany in the quarter-finals, with Les Bleus no doubt ready for some revenge on behalf of Patrick Battiston.