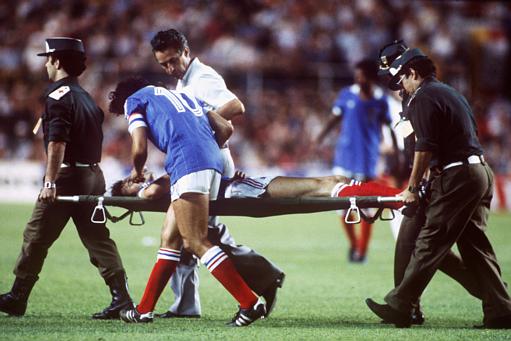 With France set to take on Germany in the latter stages of a World Cup tonight, Pies’ thoughts are inescapably turned to the semi-final between the same two teams at the 1982 World Cup in Spain – a match infamous for one reason and one reason only.

With the score stood at 1-1 following Michel Platini’s 27th-minute penalty in Seville, France defender Patrick Battiston raced clear on the break and looked all but certain to put Les Bleus ahead.

The rest, as they say, is  spectacularly grim to watch…

No foul was given by the Dutch referee, though the sickening collision with Schumacher’s hind-quarters left Battiston knocked out cold – momentarily in a coma, in fact – lying prostate on the turf with two missing teeth, a fractured jaw, three cracked ribs and damage to several of his vertebrae.

Oxygen was administered and Battiston was taken straight to hospital, though Platini later admitted that he thought his pale and pulse-less teammate was already dead. 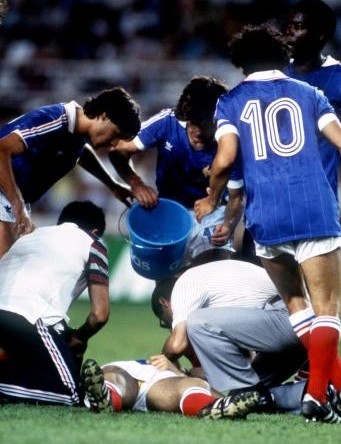 The thrilling game went on to finish 3-3 after extra-time, with Schumacher saving the crucial French spot-kick to send Germany through to the final, which they duly lost to Italy.

After hearing that Battiston had lost two of his teeth, Schumacher callously told reporters after the final whistle: “If that’s all that’s wrong with him, I’ll pay for the crowns.”

This comment led to Schumacher being public enemy no.1 in France – indeed, a poll taken in a French newspaper just after the culmination of the ’82 World Cup voted the German ‘keeper the most hated man in the France.