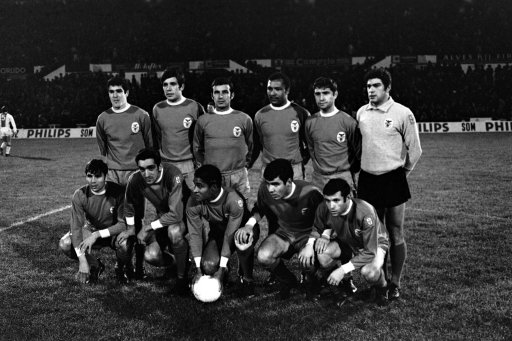 It was February 12th of 1969 and the temperature was hovering down around zero in the Amsterdam Olympisch Stadion as Johan Cruyff’s Ajax took on Eusebio’s Benfica in the first leg of the European Cup quarter-final fixture between the two heavyweight sides.

The Portuguese team came flying out of the traps and quickly forged themselves a 0-2 lead on decidedly chilly, snowbound Dutch soil, thanks to a 31st-minute penalty converted by Jacinto Santos and a far-post header tucked home by prolific beanpole centre-forward Jose Torres just five minutes later.

With the game only going ahead thanks to a concerted effort by ground staff and volunteers to clear the pitch of snow beforehand, Torres’ famously spontaneous celebration saw him clamber into the piles of compacted ice behind the goal and jubilantly chuck a massive lump of it up in the air…

Here it is in teeny-tiny GIF form…

Come out of there Jose, you’ll catch your death!

Benfica went on to win the game 3-1 in Amsterdam, though Ajax rallied in the second leg with a 1-3 away victory of their own (thus squaring the aggregate score at 4-4) in Lisbon the following week.

What followed was a third, tie-breaking “decider” match at a neutral ground (the Stade Olympique de Colombes in Paris) which the Dutch side eventually won 3-0, all three goals coming in extra-time.

Ajax went on to reach the final of the 1968/69 European Cup, only to get themselves rolled over 4-1 by the imperious Milan side of the time.

As for Jose Torres, he went on to score a ridiculously impressive 226 goals in 259 appearances for Benfica before moving on Vitoria de Setubal in 1971 at the age of 33.