On the day Wales found themselves ranked higher than England in the FIFA listings for the first time ever, Chris Coleman’s charges produced a battling display in Cyprus to leave them on the cusp of qualification for EURO 2016.

The hosts were the better side for much of the game although David Edwards did see his headed goal disallowed after Hal Robson-Kanu was judged to have pushed a Cyprus defender.

Gareth Bale had struggled to assert himself in the tense game, with the Real Madrid star on the end of some testing challenges from the home side.

However, on 82 minutes the most expensive player in the world once again made the difference, rising superbly to powerfully head home from a Jazz Richards centre…

The goal, which was Bale’s sixth in the competition, secured a famous win for the Welsh which sees them stay top of Group B (Belgium also won, 3-1 against Bosnia). Now, a victory against Israel at the weekend will guarantee them a place in a major finals for the first time in 57 years. 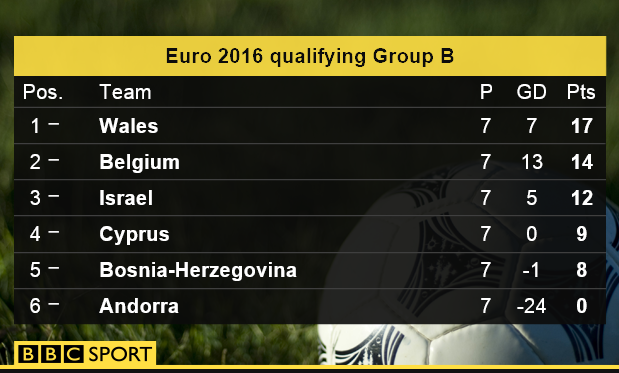