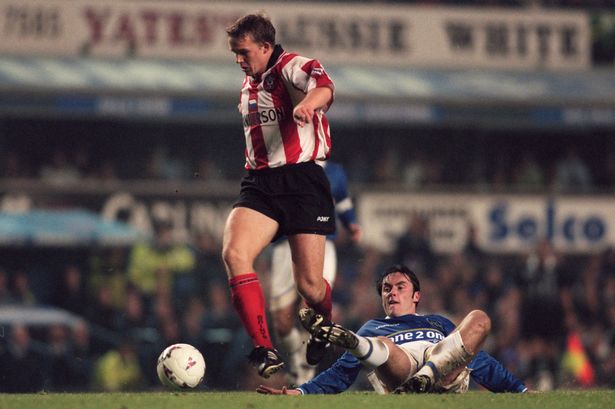 It’s with a heavy heart that we wish Kevin Davies all the best in his retirement today after the former Chesterfield, Southampton, Blackburn, Bolton, Preston and England striker called time on his playing days at the grand old age of 38.

It’s been emotional. Thank you to everyone who has helped me along the way #22seasons pic.twitter.com/TqX7NvUSRG

Davies was something of a footballing anachronism. A proper, sturdy, ham-thighed, intelligent English centre-forward who put himself about and got his shorts muddy. Not like the lily-livered wimps that populate the game these days.

If Kevin Davies dislocated a finger, he jolly well popped it back in and carried on about his business. But he could play a bit too, let’s not forget.

After starting out as a youngster at Chesterfield (following an unsuccessful trial with hometown club Sheffield United), Davies joined Southampton for the 1997/98 season, where his nine goals in 25 appearances persuaded Blackburn to fork out £8million on him the following year.

One of those nine goals proved to be incredibly uncharacteristic, even for the Kevin Davies of 1997 – a piercing run from inside his own half that saw Davies waft through a gaggle of Everton defenders on his way to scoring a sublime solo effort in a 2-0 win at Goodison…

Here’s wishing him the very best in his future endeavours, whatever they may prove to be.