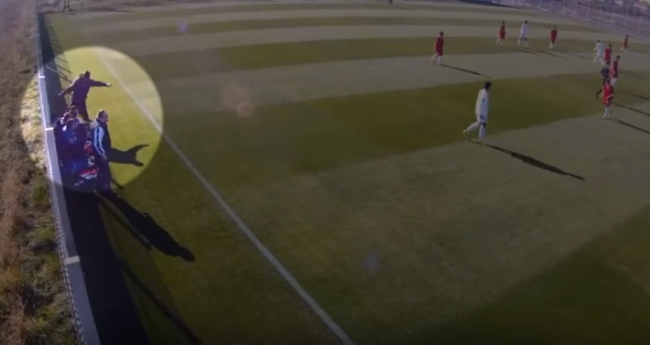 A Romanian youth coach has been unceremoniously relieved of his duties after disgusting footage of him attacking a 16-year-old player did the rounds yesterday.

Liviu Petrache, coach of the Under-17 CSM Studentesc Iasi side, was filmed losing his temper on the touchline during a game and hoofing seven shades out of one of his own players.

The youngster, later identified as Codrin Tirisca, 16, was reportedly booted by Petrache, 40, for having the temerity to go against his coach’s orders and organise a secret team trip to McDonald’s the night before the game.

The Mirror have a video of the incident, which obviously doesn’t make for easy watching…

The night before we were due to play, we were put up in a bed and breakfast.

None of us had anything to eat because the food there was so awful, and in the night we were hungry so we sneaked out on foot to the [McDonald’s] restaurant and bought something.

You’ll no doubt be glad to learn that, according to Romanian news site Gazeta Sporturilor, Petrache was immediately fired by CSM Iasi when news of his psychotic break came to light.

Codrin’s father also issued a statement to Gazeta in which he said he was “undecided” about pursuing legal action as he isn’t interested in “taking money” from Petrache.