On an emotional night at Wembley, a youthful England side produced a fine performance in an entertaining clash with France, with the hosts running out 2-0 winners. 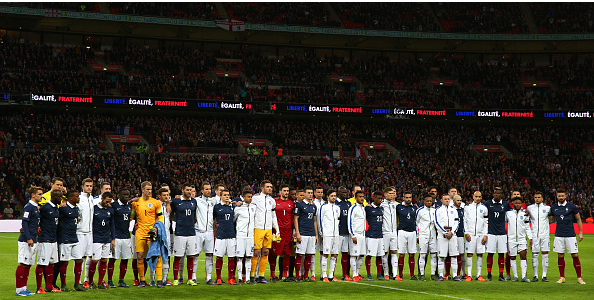 England started brightly, with Dele Alli catching the eye in midfield and Wayne Rooney impressing on the right of a front three.

For the visitors, both Anthony Martial and the reborn Hatem Ben Arfa looked dangerous.

Rooney had a great chance to open the scoring when the Man Utd man turned Laurent Koscielny, only to blast wide when he really should have hit the target.

But the opening goal eventually came, with Alli producing an outstanding strike from outside the box, which left Hugo Lloris helpless in the French goal.

After the break, it took only three minutes for the Three Lions to double their advantage, with Rooney volleying past Lloris from a Raheem Sterling centre. Although the Spurs ‘keeper should’ve done better.

Harry Kane then rifled a long-range effort just wide as the hosts pushed for a third.

The introduction of Paul Pogba at half-time had injected some urgency into the French side, with the midfielder starting to fashion some chances for the visitors.

Indeed, it was the Juventus midfielder who set up Martial with a clever backheel, only for sub Jack Butland to produce a superb save from the Man Utd man’s shot.

Ultimately, Les Bleus couldn’t find a way back into the game, leaving England to secure their first win against France since Le Tournoi in 1997.

However, this was a night about far more than football, with the FA’s handling of the emotional occasion spot-on and the fans of both teams contributing to a memorable night.