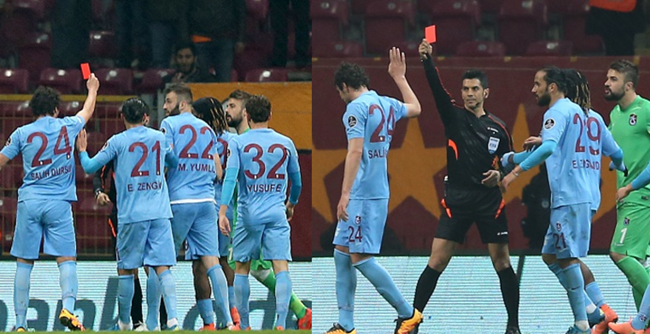 Sunday evening’s Turkish SuperLig tie between Galatasaray and Trabzonspor quickly devolved into an utter farce as the visiting side ended the game with just seven men on the pitch.

Referee Deniz Bitnel sent four Trabzonspor players packing, including Salih Dursun – who received his marching orders in the 87th minute for sarcastically flashing the red at the official just after teammate Luis Cavanda had been ejected from the field…

A Trabzonspor played pulled a Gazza last night showing the ref the red card & gets sent off. You couldn’t make it uphttps://t.co/tlKTlQ7UiC

‘Doing a Gazza’ as it’s known in the trade…

Just to ground a handful of coarse sea salt into the wound, Trabzonspor then went and lost the game 2-1 thanks to a last-minute Selcuk Inan penalty.

What a bloody horror show.