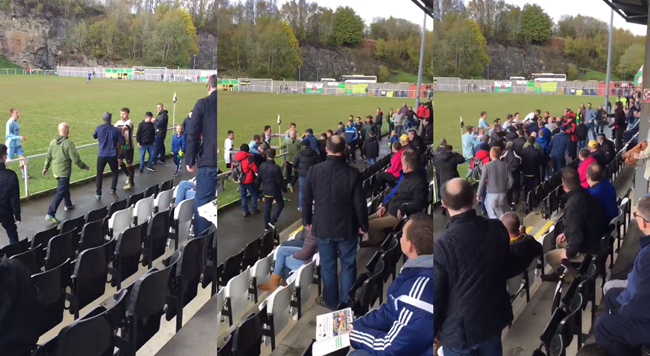 There were depressing scenes at the end of Saturday’s Welsh Premier League game between Cefn Druids and Caernarfon Town when players and fans came to blows in the terraces.

Third place Druids were soundly thrashed 7-0 by table-toppers Caernarfon. To make matters worse, they ended the game with ten men on the pitch after having a player dismissed for a reported head-butt.

After being heckled by home fans as he trudged back to the dressing room, the player vaulted the pitch-side railing and began throwing punches. It didn’t take too long before a great swarming melee of players and fans had formed around him…

The player was sent off but as he walked to the changing room he became involved in an argument with a Carernarfon fan and then it escalated.

The other players from Cefn Druids stepped in to try and break it up. There were police right there next to around 100 Caernarfon fans and then I saw around 10 other police cars turn up afterwards.

Sadly, the ridiculous brawl marred what should have been a special occasion for Caernarfon, who secured the league title with their emphatic victory.