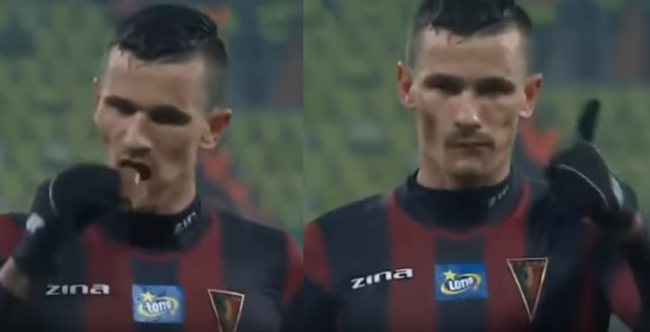 Trailing 1-0 to Lechia Gdansk in the Polish Ekstralasa at the weekend, Pogon Szczecin nabbed themselves a chance to equalise from the spot a mere matter of seconds before half-time.

Up stepped striker and top scorer Adam Fraczczak, only to be pelted by a rogue chocolate bar hurled at him from the Lechia supporters behind the goal.

However, instead of getting flustered, Fraczczak simply picked up the chocolate, took a defiant bite, flashed a quick thumbs-up to the supporters and proceeded to bury his penalty…

The match went on to finish 1-1, with Fraczczak undoubtedly taking the moral victory.