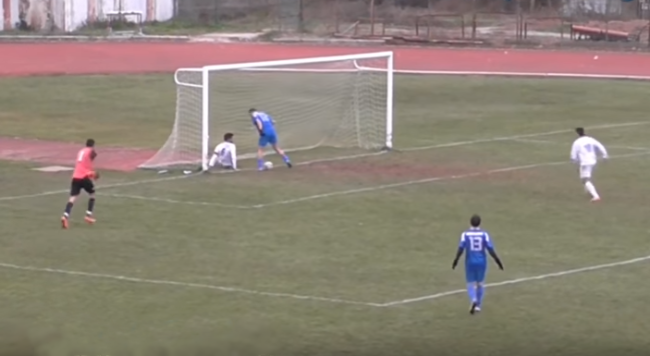 You’ll have to forgive the slightly sketchy details here but, alas, Pies’ Greek regional tier sources aren’t as reliable as they might be.

Anyway, what we think we’re looking at here is a swatch of action from a recent tie between Makedonikos Kozanis and Vatera down in the fourth-tier.

Specifically, you’re about to witness Kozanis striker Thanasis Takidis etch his name in eternity by somehow failing to score from around 15 centimetres out despite leaving both the goalkeeper and defender on their backsides…

If we were being generous we’d commend the defender on his last-ditch tackle but we feel it’d be wrong to gloss over the magnitude of that howling miss.

Safe to say, if you’re making this Serbian ‘striker’ look positively adept in front of goal then perhaps it’s time to start looking for another hobby.