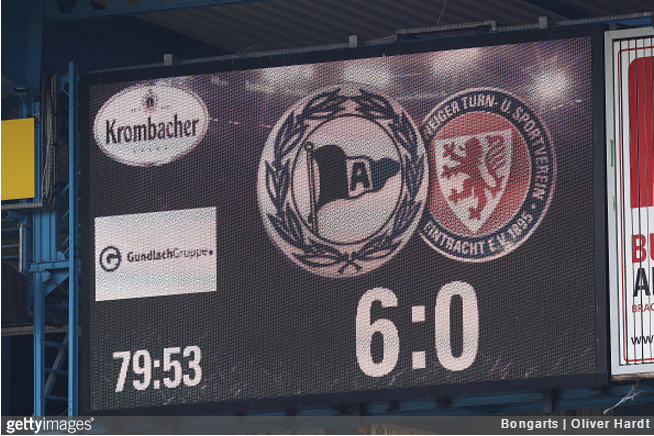 Entrenched down in the 2. Bundesliga relegation zone going into their penultimate fixture of the season, Arminia Bielefeld faced the daunting proposition of having to take points of third-placed Eintracht Braunschweig on Sunday to keep their survival hopes alive.

However, it transpired that they had a secret weapon ready to deploy in times of crisis, and that weapon was assistant coach Carsten Rump.

Indeed, Rump gathered the players in the dressing room before kick-off and gave them one holy hell of a motivational team-talk…

Pacino in Any Given Sunday or @arminia ass. coach Carsten Rump? RT if you’d fight for every single inch for this guy! 🙌🙌#Mondaymotivation pic.twitter.com/mKgyEUVnVN

As well as rattling their fillings, Rump’s rant coaxed an immense performance out of Bielefeld, who defied the odds by steaming to a 6-0 win – a collective performance so good that eight of their players ended up in Kicker Magazine’s team of the week.

The victory also saw Bielefeld leap from 17th (second bottom) to 15th in the standings, clear of the relegation play-off place on goal difference going into their final game against Dynamo Dresden.

The result also had a marked effect on Braunschweig’s league standing, causing them to drop out of the automatic promotion places after being usurped by Hannover, who themselves beat Stuttgart to go second.

It’s all to play for, as they say in the business.