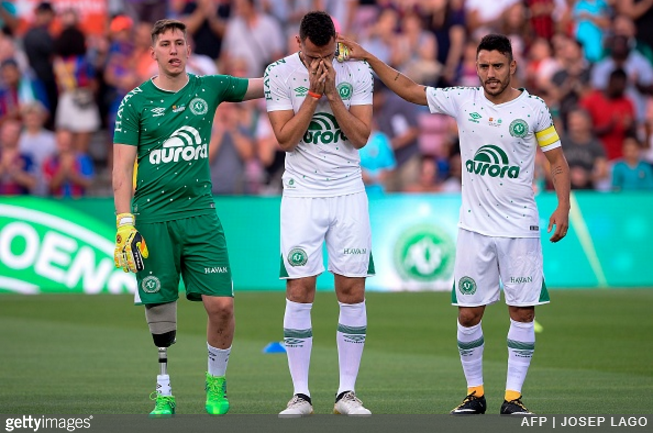 As you might expect, emotions ran high throughout with the only three players to survive the disaster – Jackson Follman, Neto and Alan Ruschel (all seen above) –  invited out onto the Camp Nou pitch before the match to perform a ceremonial kick-off…

Having suffered serious spinal injuries in the crash, Alan Ruschel did exceeding well to last the first 35 minutes of the game, leaving the pitch to a unanimous standing ovation from the 65,000-odd fans inside the stadium…

Chape played in special jerseys that featured 71 stars spread across it: one for every victim of the plane crash.

Barca ended up winning 5-0 with goals from Gerard Deulofeu, Sergio Busquets, Lionel Messi, Luis Suarez and Denis Suarez, not that the evening was anything other than a testament to the memories of all those poor souls who lost their lives back in November and the fortitude of a football that refused to give up in the aftermath.

Here are the highlights…