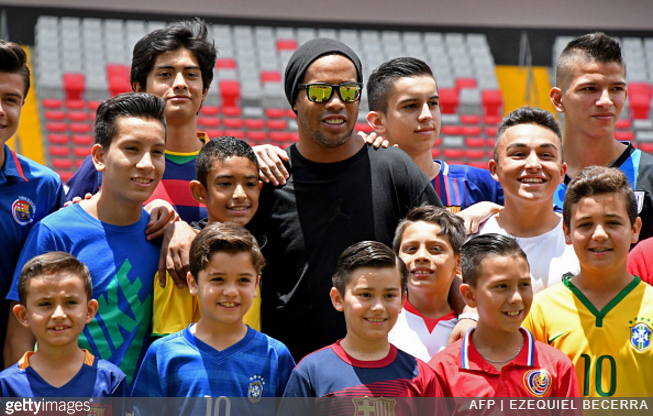 Without a club at the moment, Ronaldinho is currently on a mini-tour of Central America where he’s picking up cheques for taking part in a string of exhibition games in Honduras, El Salvador and Costa Rica.

The Costa Rican friendly took place at the Nacional stadium in San Jose, where Ron and his guest XI enjoyed a spirited kickabout against a team of local ‘Leyendas’.

During the match, a giddy young Ronaldinho fan came romping onto the pitch, intent on giving his idol a big, appreciative hug.

Sadly, the lad was unable to locate the Brazilian star amid the two teams before he was bundled off the pitch by stadium security – until his hero overheard the kerfuffle and stepped in…

When asked recently if he’d officially retired or not, Ronaldinho told a reporter – “if there’s a team that would want me without the training, it’s still possible to play.”

Just like that, he’s now Pies’ ultimate hero too.