The Republic of Ireland suffered a disappointing defeat at home to Serbia on Tuesday night, a result which seriously damages their hopes of making it to Russia next summer.

Shane Duffy thought he had scored early on, only for the goal to be correctly ruled out for offside.

Overall, the Irish were much improved from their turgid draw with Georgia at the weekend.

However, it was the visitors who would bag the only goal of the game, with ex-Man City full-back Aleksander Kolarov blasting home after the break.

Whack! They don’t get hit much harder than that!

The Irish were then given a numerical boost on 68 minutes when Nikola Maksimovic was sent off.

Not long after, the hosts had a great shout for a penalty when sub Daryl Murphy, who had been fouled in the incident which led to the red card, was hauled down in the box. However, referee Cuneyt Cakis saw fit to ignore the protests.

Murphy had a decent chance late on to nab a precious equaliser, but ultimately the chaps in green would lose – a result which serious dents their hopes of qualification.

Martin O’Neill’s men now fall to third in the Group, a point behind Wales and five behind leaders Serbia. 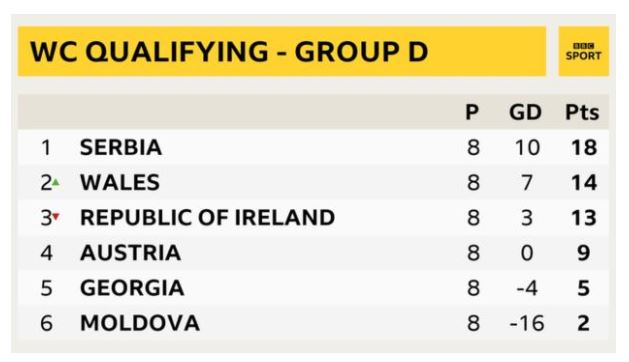