Republic of Ireland went barnstorming into the World Cup play-offs by beating Wales in Cardiff on Monday evening to thereby quash their opponents’ thin hopes of making it to Russia.

The evening kicked-off with a stirring a capella rendition of the Welsh national anthem, Land of Our Fathers, which the home contingent bellowed out in bristling unison…

In what was essentially a winner-takes-all-depending-on-results-elsewhere battle of the lower Premier League middleweights, Ireland rope-a-doped Wales for the majority of the night and eventually came out on top thanks to a single James McClean goal scored in the 57th minute.

After receiving a bowl-out from Wayne Hennessey that he really didn’t want, Ashley Williams surrendered possession deep in his own half only for Jeff Hendrick to break clear down the touchline and slide an inviting ball across the box (aided by a smart dummy from Harry Arter) that McClean pinged home.

Williams’ form for club and country really is cess-pit awful at the moment. What the heck happened? Could it be something to do with that naff hairstyle? Questions, questions.

Anyway, after going behind, Wales turned the screw for the remainder of the match – half-an-hour that “seemed like an eternity” according to Ireland manager Martin O’Neill – but the visitors puffed out their chests and held firm. 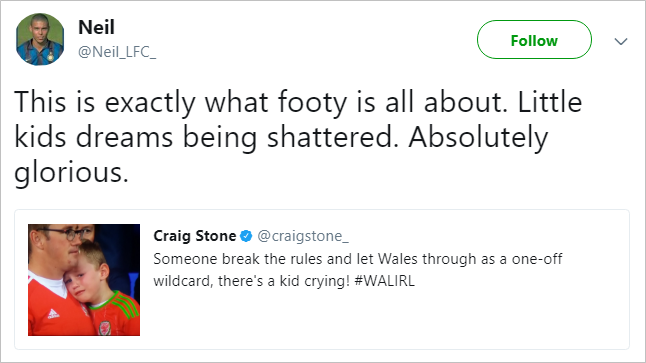 The result saw the Boys in Green leapfrog their vanquished foes into second place in the final Group D standings, with Serbia’s 1-0 win over Georgia ensuring they wrapped up top spot.

As far as the play-offs go, Ireland will learn of their fate when the draw is made on 17th October. Potential (seeded) opponents include Italy and Croatia, but we won’t know for certain who they might end up with until the last batch of qualifiers are concluded tonight.