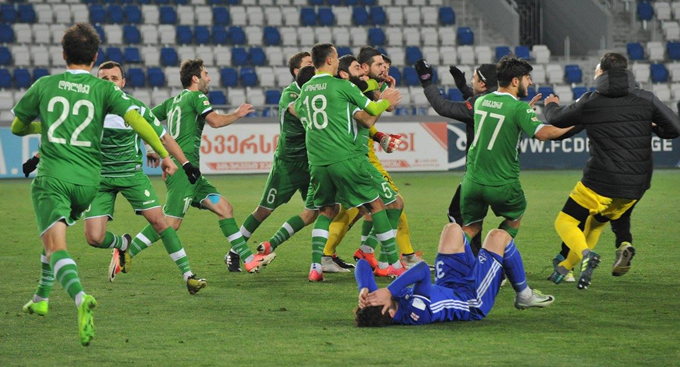 The Georgian Premier League (the Erovnuli Liga) came to a dramatic conclusion over the weekend, with the title-decider between Torpedo Kutaisi and Dinamo Tbilisi proving every bit as chaotic as you might imagine.

Going into the match, Torpedo needed to win to usurp Dinamo and clinch the championship, while the latter simply required a draw to seal the deal.

As it panned out, Torpedo (the team in green) were leading 1-0 as the 94th minute began wicking away. However, Dinamo then found themselves presented with a penalty in the dying seconds when Mykola Kovtalyuk was rather theatrically felled by Giorgi Guruli in the area.

Kiteishvili saw his effort repelled by Torpedo ‘keeper Roin Kvaskhvadze, who hooked the shot away with his legs as the final whistle sounded.

Torpedo clinched their fourth ever Georgian championship, while the referee was left to flash a miscellaneous red card in the thronging melee that ensued.

The excitable chaps from Kutaisi now have a chance to go one better and tie up a league-cup double next weekend when they take on Chikhura in the final of the Georgian Cup.

On this evidence, a breakout of mass spontaneous human combustion must be a real concern.