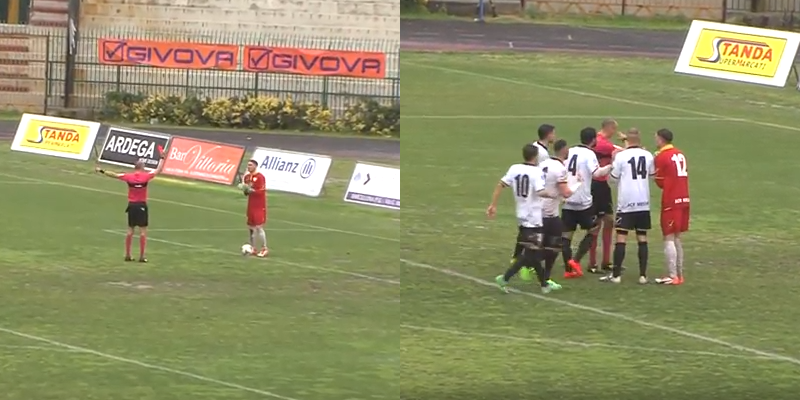 Indeed, excess water proved to be the overriding theme of the match as the home side found themselves limping home with 10 men after the dismissal of their goalkeeper, Armando Prisco.

Prisco only entered the fray as a half-time substitute and yet still failed to make it past the 85th minute after the referee spotted him trying to execute a crafty wazz in the back of his own net while play continued at the other end of the pitch.

The red card can be seen being brandished at the 0:39 mark, though sadly the highlight compilers decided against including the actually incident itself…

Speaking after the game, Prisco explained that he made an effort to try and be demure about taking a slash mid-match, but to no avail (quotes via AP):

I made a gesture as if I was just stretching because I knew that people were around and I didn’t want people to think I was urinating.

He (the referee) took it a bit too personally. I was honest enough to tell him what happened and I don’t think anyone else noticed.

Unfortunately, Messina had already used all three of their allocated subs, so a centre-back had to take Prisco’s place in goal for the final five minutes.

However, as aforementioned, the defender did manage to keep his sheet clean – which is more than can be said for his ‘keeper.