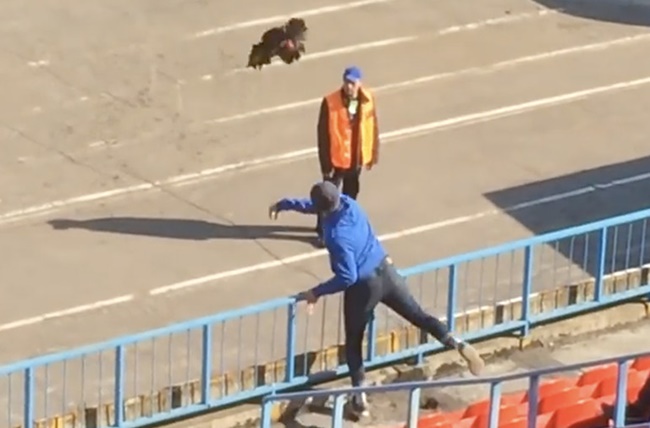 It’s Sod’s Law that you wait for one Russian animal abuse/football crossover story to turn up and then two come along at once.

One the very same weekend that third-tier Masuk-KMV made a brown bear perform their pre-match formalities, a similar incident also cracked off in the league above.

Indeed, a fan of Luch-Energiya Vladivostok decided he was so fed up with manager Aleksandr Grigoryan that he smuggled a live rooster all the way to Sunday’s away match against FC Fakel Voronezh to hurl at the beleaguered coach…

A fan of Luch-Energiya, the 2nd tier Russian Football National League club in the country’s Far Eatsern city of Vladivostok, throws a live rooster onto the pitch in protest at manager Aleksandr Grigoryan 🐓 pic.twitter.com/JBbxfLjcTX

According to RT, the fan in question “risked being jailed for 15 days” but it transpires that the animal cruelty on display was perfectly excusable, as Luch-Energiya have only managed two wins in their last 10 games, leaving them third from bottom in the Football National League table – so obviously chickens must be thrown.

Grigoryan, the target of the giblet-toting missile, isn’t particularly popular among the Energiya support either, having left the club midway through the 2013/14 season to join despised rivals SKA Khabarovsk, only to return a few years later.