England ensured they’ll be taking a 10-game unbeaten streak into the World Cup by finishing off their pre-tournament itinerary with an enjoyable 2-0 win over Costa Rica.

The game was played at Elland Road and, unlike sparse and cavernous Wembley, the atmosphere inside the ground was boisterous and effervescent from the off.

England’s bright start was personified by Marcus Rashford, who played with the kind of freedom not regularly gifted to him at club level – the 20-year-old striker rolling off a series of fleet-footed flicks and tricks much to the delight of his audience.

Indeed, it was Rashford who opened the scoring just 13 minutes in when the Manchester United forward cracked a fiendish dipping effort over Keylor Navas from 25 yards out…

The pizzazz and positivity dropped off just a little in the second half as a raft of substitutions upset the Three Lions’ rhythm a smidge.

However, things eventually started to pick up again as the half wore on and it was Danny Welbeck who added the second goal 10 minutes after replacing the largely isolated and redundant Jamie Vardy.

Speaking of substitutes, a new star was born in the latter stages when Costa Rica brought on a replacement with a name so wonderfully mundane, it sent ructions of disbelief across social media… 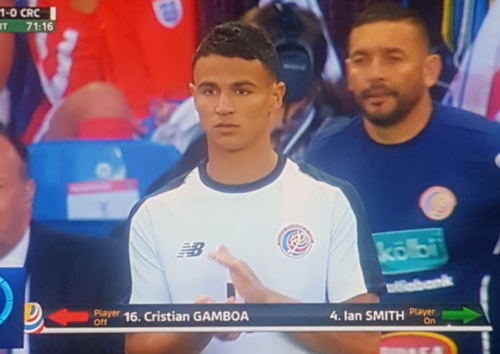 Ian Smith. Smashing stuff. 20 years old, born and raised in Central America and yet he still shares a name with that bloke you know who lives a few streets over and sells dodgy Amazon Fire sticks on the sly.

Anyway, that’s that. Gareth Southgate and his exciting charges now fly out to Russia on Tuesday. The dress rehearsals are over.

After putting in a timely match-winning shift, Rashford looks like a shoe-in to start against Tunisia, and with Harry Kane coming back in for Vardy, the team suddenly look capable of making a decent fist of it.

An England team we like and are actually rooting for? Whatever next!