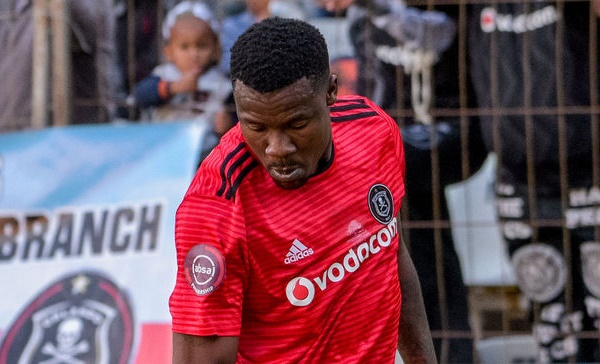 Photo: Frikkie Kapp/BackpagePix (via Kick Off)

Orlando Pirates mustered a decent 2-1 away win over Black Leopards in South Africa’s Premier Soccer League on Tuesday, having done so with just 10 men for the final hour of the game.

This is because Pirates striker Thamsanqa Gabuza, in a defiant attempt to silence his haters, managed to get himself sent off in thoroughly ludicrous circumstances.

Gabuza has been the target of heckling and jeckling from Pirates fans for a while due to his almost impressively atrocious strike rate – eight goals in five seasons.

So, having forced an own-goal to open the scoring against the Leopards, Gabuza was suddenly overcome by a surge of vitriolic passion and charged over to the travelling fans to give them a bit back.

He then marched straight down the tunnel as if his work had been done, despite the game only being 35 minutes old.

Pirates coach Milutin Sredojevic then had to manhandle Gabuza back out onto the pitch where he was promptly sent straight off, having picked up one yellow for removing his shirt while celebrating his ‘goal’ and another for leaving the field without consent…

Sredojevic then attempted to excuse Gabuza’s slapstick tantrum after the final whistle, claiming that the forward had attempted to leave the pitch with an injury.

I’m personally not ready to comment. It is something beyond the coach.

Gabuza went off because prior to that he got kicked in his muscle, and after the goal was scored he left because of that injury.

However, the referee has recognised as per the rules that he went out of the field without him knowing. He put his jersey down so double yellow card and red card.

We played for 60 minutes with a player less against a very good team, it was not easy.

However, players gave everything and deserved to score the second goal.

Just imagine what Gabuza would’ve done if he’d actually scored? The whole of Limpopo would just be a smouldering hole in the ground by now.