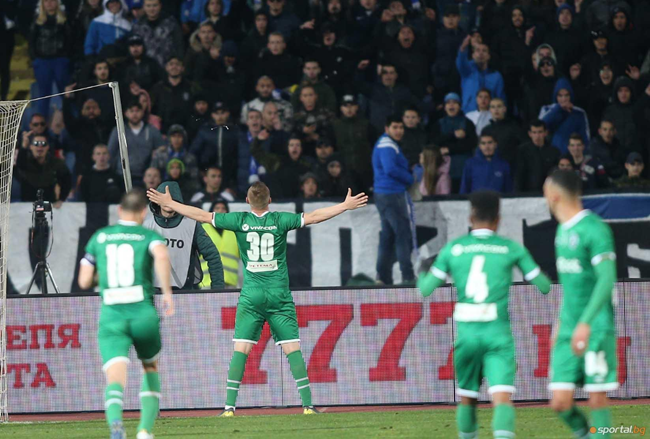 Ludogorets beat Levski Sofia 2-0 on Sunday to extend their lead at the top of the Bulgarian First League, and did so despite ending the evening with 10 men on the pitch.

That was because defender Cosmin Moti managed to get himself sent off in the 82nd minute, shortly after scoring the penalty that put Ludogorets two goals up.

The Romanian defender was actually dismissed in the immediate aftermath of his spot-kick, picking up a second yellow card for provoking the Levski fans behind the goal with his celebration.

As you might imagine, tensions boiled over an a small-scale riot erupted…

Romanian defender Cosmin Moți sealed Ludogorets’ 2-0 win over Levski, converting a penalty. The way he celebrated in front of the Levski fans led to riots in the stands and some of them invaded the pitch. Play was stopped for a few minutes, with Moți getting a second yellow card pic.twitter.com/ovckKXJ8mo

Moti was then temporarily delayed in leaving the pitch as Levski fans pelted him with various bits of detritus.

One livid supporter even clambered on top of the tunnel in an effort to get to the Ludogorets man, but ultimately saw his plans fall through in the most literal of ways…

One Levski fan even tried to invade the pitch walking ON the stadium tunnel at the National Stadium in Sofia before the tunnel roof collapsed… pic.twitter.com/kzl4VdQ68C

Moti eventually made it through the gauntlet and back to the dressing room, but only with an assist from the police…

Surreal stuff in Bulgaria!!! Romanian defender Moti gets sent off, then has to leave the pitch under police escort!!! Fan JUMPS on the tunnel to kick him!!! Incredible scenes in tonight’s derby between Levski and Ludogorets!!!! pic.twitter.com/TNTF03zhgP

According to @mshumanov, word in the local media is that Levski have demanded Moti be banned for five matches for his incendiary conduct.

Are we supposed to celebrate our goals once we make it to the dressing room and not on the pitch?

We can only imagine that the truth lies somewhere in the middle.