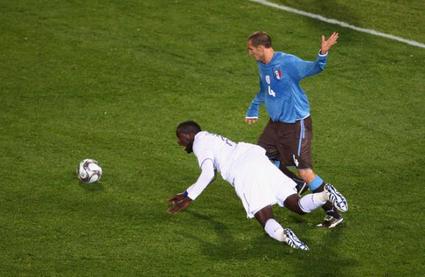 With no domestic football to talk about (apart from what’s being churned out by the massive rumour factory), the 2009 Confed Cup is doing a very good job of satisfying my appetite for football. It produced two cracking games yesterday, with 11 goals in all.
Egypt, a team you would be foolish to underestimate, ran Brazil very close, while Italy made a meal of beating 10-man USA. Watch highlights of both games below…

Brazil got out of jail there. The Egyptians have complained about the way the penalty was awarded by Howard Webb, and though there’s no doubt that it was a pen, it seems Webb initially gave a corner before changing his mind, perhaps as a result of speaking to a fourth official who had seen a TV replay of the incident. Anyway, Egypt can be proud of their performance.

USA v Italy is becoming quite the grudge match, and this was another feisty game. The USA played well in the first 60 minutes but received no help from the Chilean ref, who ballsed up two key decisions in the first half: US midfielder Ricardo Clark should never have been sent off for his clumsy high tackle on Gennifer Gattuso (it deserved a straight yellow, nothing more), and Gieorgo Chiellini should have seen red after he cynically fouled Jozy Altidore in the box. With the US down to ten men, there was only going to be one result. And how galling for the Americans that they gave up goals to the thug who broke Brian McBride’s jaw and a striker who was born in New Jersey. Ouch.