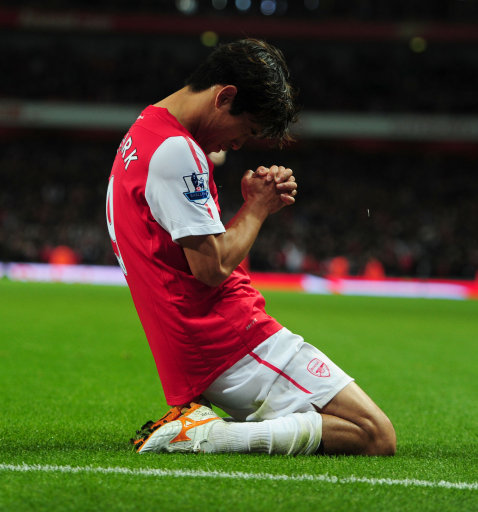 ‘Please God, let me dodge the army for another 10 years”

One of Arsene Wenger’s surprise last-minute summer purchases, striker Park Chu-Young, was expected to return to South Korea in the next year or two to undertake his national service. However now, the powers that be in the country have said that, due to the player’s 10-year residency in Monaco, he is able to postpone his stint (two to three years) with the army until 2022.

The striker looked to have been an astute purchase by Wenger when he arrived from Monaco for £3million. However, so far, he has yet to make much of a dent on the first team, making just six appearances in all competitions this season.

There have been numerous occasions so far this season when the Gunners were comfortably winning games, when Wenger could have brought Park off the bench but chose not to. He might not have to return to his homeland, but one wonders if the South Korean captain will still be at the Emirates come the start of next season.

PS: Thinking about it, a lot of English young players could do with national service to get them to grow up. Not necessarily in the army, mind. Surely the likes of Jermaine Pennant, John Terry, Joey Barton and David Bentley could all have done with a year or so painting over graffiti, picking up rubbish or doing ‘meals on wheels’?