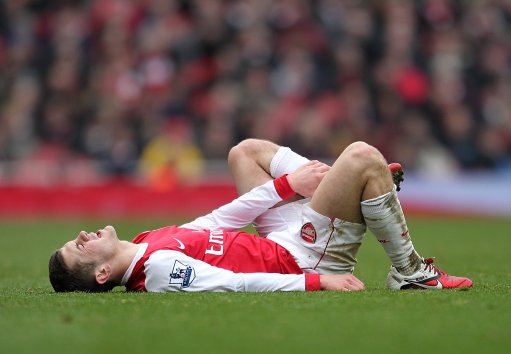 Touted as England’s shiny new talisman only a year ago, Arsenal schemer Jack Wilshere has seen his whole season pass by without kicking a ball in anger. While he was expected to be ready for the start of the 2012/13 campaign, news that the youngster is to undergo yet another operation is sure to have both Arsenal and England fans worrying about the midfielder’s long-term future.

Initially, Wilshere’s injury, suffered in action for England in June, was expected to keep the player out of action for no more than a matter of weeks. However, a minor niggle suddenly morphed into a serious stress fracture of his ankle and since then, Wilshere has been hounded by various related ailments. He had been expected to finally break clear of his injury problems in time for the new season, but now this latest setback which will see him undergo surgery on his left knee, is sure to have Arsene Wenger concerned. Arsenal don’t seem to be worried themselves, releasing this statement:

“His ongoing rehabilitation has seen a long-standing slight issue with his patella tendon in his left knee flare up. As a result, Jack will travel to Sweden for a minor procedure on his left knee in the next few days. This procedure is not expected to significantly affect Jack’s comeback ahead of next season.”

“On returning to England, Jack will resume his rehabilitation with the Arsenal medical team over the summer.”

It may all looks good for the new season then, however, the Gunners have underplayed the serious of Wilshere’s injury before. For both Gooners and England fans, the worry remains that their young star may never be able to fulfill his sizeable potential.

For England’s sake, let’s hope he doesn’t end up like French team-mate Abou Diaby. The man’s stuck in limbo.