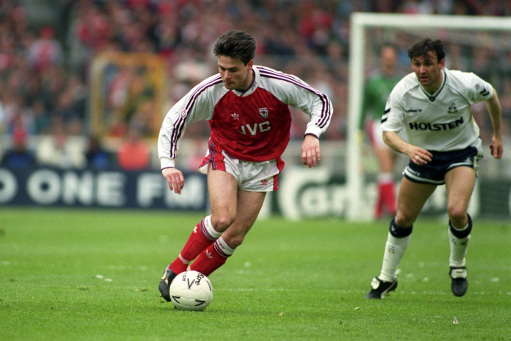 Arguably one of the most gifted (if inconsistent) players to play for the Gunners over the last 30 years or so, Super Swede Anders Limpar has launched a rather scathing attack on his former boss at Arsenal, George Graham, comparing the Scottish manager’s regime at the club to that of Saddam Hussein.

Limpar joined the Gunners from Serie A side Cremonese in 1990 and immediately blossomed in north London, helping them to the 1990/91 First Division title courtesy of his tricky wing play and regular goals. However, by 1994, the Swede had found himself on the fringes out of the first team by the likes of mediocre wideman Eddie McGoldrick as Graham bizarrely filled his squad full of hard working cloggers (see Ian Selley, Steve Morrow etc).

Limpar was eventually sold in the summer of 1994, something which still irks him. Speaking on Aftonbladet TV, he said:

“George Graham’s regime was like living in Iraq under Saddam. He was disgusting. You would turn up for training one day and he would call one player into his room, although it wasn’t a room because everyone could hear what he was saying. Then he (George Graham) would say –  ‘I have sold you to Leeds.’ So the player replies – ‘I don’t want to join Leeds.’ Graham then says: ‘Well, you just have to pack your bag and leave.'”

“What a swine. I have never seen a guy like that. Tears running down his cheeks. Had been at Arsenal since he was 16. I think it was Leeds he was sold to.”

Which player is he referring to here? Is it Gunners legend David Rocastle? Or is he talking about Michael Thomas’ move to Liverpool?

“He sold me in April with my contract running out in May. No talk of extending the contract, just ‘bye bye’. I said: ‘I would like to carry on playing for Arsenal and sign a new deal’, to which he replied: ‘No you are not.”

“So I said – ‘But I’ve won so many titles in four years for you, is that not enough?’ So we went in to his office and I had my agent with me and Graham is talking and says: ‘I have a really good offer from Manchester City so you are going there.’ (He eventually went to Everton instead).

“So I realised that I was leaving the club, extended my hand to shake his hand and said: ‘Well, thanks for four years then.’ And then he just swivelled round on his chair and stared into the wall.”

Graham’s dictatorial style is well known in the game. However, you can’t help thinking that Limpar is er, slightly over stating his case by comparing him to Saddam?

In the interview, the Swede was also asked if he’d bumped into Graham since leaving Arsenal, to which he replied:

“Have I met Graham afterwards?. Several times. He is his usual self, arrogant.”

I’d get myself hidden down a hole in the ground somwehere if I were you, George. Anders is coming to get you!