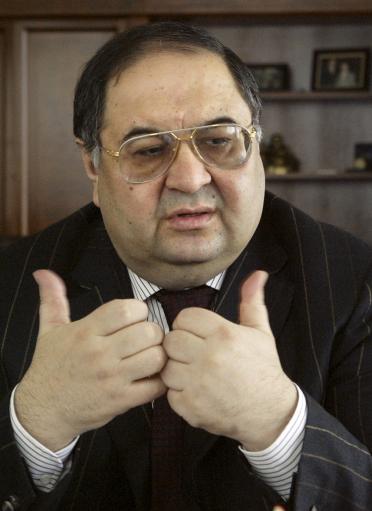 “What’s got two thumbs, three chins and don’t give a crap?”

Arsenal’s second biggest shareholders (the jokes write themselves), Russian billionaire Alisher Usmanov and Farhad Moshiri, have written an open letter  – obtained by the AP – to openly criticise owner Stan Kroenke’s running of the club after it was made public yesterday that Robin van Persie is to effectively be released back into the wild this summer.

The letter in full (via Arseblog):

“It is down to our manager and not the shareholders to have to deal with the club’s tight finances, carry the burden of repaying the stadium debt by selling his best players and having to continue to find cheaper replacements.

“All of that, naturally, comes at the expense of performance on the pitch. This policy is leading to the loss of our best players, often to our main competitors, and even causes the players themselves to question their future at the club and the club’s ambitions. The situation with our captain and outstanding performer from last season, Robin van Persie, sums this up.

“Tight finances [mean Arsene Wenger is forced into] selling his best players and having to continue to find cheaper replacements. All of that, naturally, comes at the expense of performance on the pitch.

“Yet again we are faced with losing our true marquee player at the club because we cannot assure him of the future direction and given confidence that we can win trophies.

“Where are the safeguards to ensure that this doesn’t happen again and again in the future? As a top club we should, at the very least, match if not beat the offers that other clubs make to try and lure our very best players away, and also provide a more compelling vision of the future.

“You can try and put a good face on a bad game for as long as you want, pontificating about the merits of this model, but it will not hide the obvious fact that it just does not allow our great manager to fully realise his managerial talent and deliver success for the fans who are paying the highest prices in the land.

“It appears that a place in the Champions League will be the pinnacle of our ambition again next season. Unfortunately, in the future we may see this ambition lowered further.”

We’re sure it’s nowt but pure coincidence that the Usmanov letter was released a day after Van Persie’s announcement.

Actually, scratch that. It’s obviously been timed to cause the maximum damage in an attempt to undermine Kroenke entirely. Basically, as we’re led to believe by those much more in tune with boardroom-level machinations at Arsenal, Usmanov wants control.

That said, as someone who owns 29% of the business, he’s perfectly within his rights to voice his concerns over the way the club is ran. That said, the way he’s decided to go about doing it is probably the best measure of the man you’re ever likely to get.