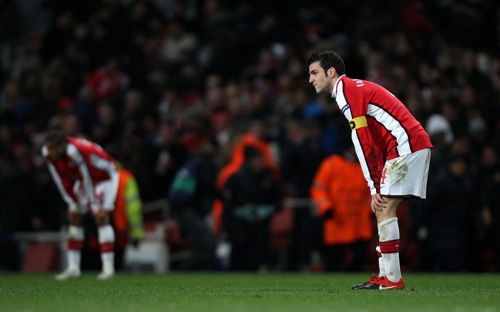 Cesc Fabregas‘ domestic season is OVER. It was confirmed this afternoon that the Arsenal skipper fractured his right leg during the Champions League clash against Barcelona on Wednesday evening.

An Arsenal statement read: “Following a scan this afternoon, the club can confirm that Cesc Fabregas has suffered a small crack in his right fibula as a result of the collision with Barcelona defender Carles Puyol during Wednesday evening’s match.

“As a consequence, Cesc will miss the remainder of the domestic campaign as he will be out of action for at six weeks.

“Everyone at the club wishes Cesc a full and speedy recovery.”

It’s a massive dent in Arsenal’s Prem title challenge, not to mention its slim hope of making it all the way in the Champions League. I just hope Cesc recovers in time to go to South Africa this summer. The early word is he will be fine for the World Cup.