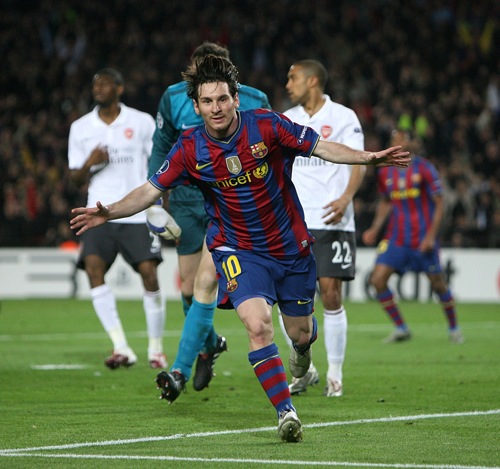 Posting at half-time in the Lionel Messi vs Arsenal game. Messi has scored a hat-trick already (zoinks!). In the process he put on a clinic in finishing. And it had started so well for the Gunners, with Nicklas Bendtner scoring the first goal from a Theo Walcott assist. But as I Tweeted not long ago: don’t make Barca angry, you won’t like them when they’re angry. Especially Messi, who is winning this one on his own. Literally. Well, almost literally.

I know it’s all too easy to get caught up in the Sky Sports hype machine (Andy Gray talks almost entirely in cliches now), but holy f**k, Leo is astonishing, amazing, awesome, and other adjectives beginning with A.

Now let’s see if Arsenal can keep the score down…

UPDATE: So, 4-1 in the end, with Messi getting his fourth late on. Inter beware.