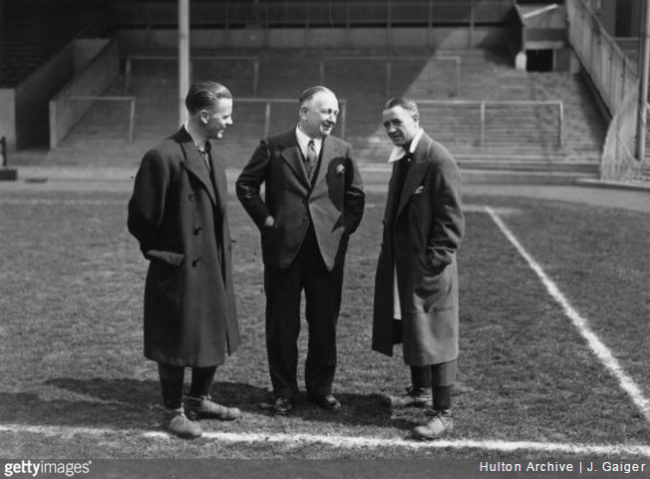 Arsenal manager Herbert Chapman (centre) chats with a key member of his team, Alex James (right), on the pitch at Wembley before the FA Cup final, April 1932

Born in Kiveton Park near Rotherham in Yorkshire, Herbert Chapman had a fairly mediocre playing career before making his first major impression in English football as manager of Huddersfield Town in the early 1920s.

Indeed, Chapman took the Terriers to successive league titles in 1923/24 and 1924/25, but only after successfully overturning a lifetime FA ban that he was sentenced to at previous club Leeds (over dodgy dealings with ‘guest players’ being brought in as ringers during the First World War).

However, it is at Arsenal that he is most fondly remembered – and that’s despite him playing for beloved neighbours Tottenham over 40 times between 1905 and 1907.

Chapman was lured to Arsenal in 1925 when the club offered to double his salary, and he led the Gunners to their first major trophy, the FA Cup, in 1930 – ironically enough against Huddersfield in the ‘North vs South’ final.

Chapman established the club as the leading English side of the 1930s – they won five league titles in that decade – though sadly he didn’t live to see the full extent of his success. He suddenly died of pneumonia on 6th January, 1934.

By that time, Chapman had already made his indelible mark, not just with those trophy wins but also as an innovator. He is credited with having introduced the W-M formation (a kind of 3-2-2-3 arrangement) to English football as well as numbering on football shirts, floodlighting and formal training plans.

No wonder they gave him a statue.