FA Cup holders Arsenal booked their place in the last eight of this season’s competition after a convincing 4-0 replay victory away at Hull City. However, a group of travelling fans showed their disapproval as the club’s recent poor form by unveiling a banner urging manager Arsene Wenger to go.

Both Tigers’ boss Steve Bruce and Wenger decided to rest a number of key players, however, it was two of the Gunners’ experienced stars who would get among the goals at the KC Stadium, with new dad Olivier Giroud and Theo Walcott bagging a brace each.

However, despite the win which moves the north Londoners a step closer to making it three Cup successes in a row, some fans remain unconvinced, judging by this banner which was unfurled during the game… 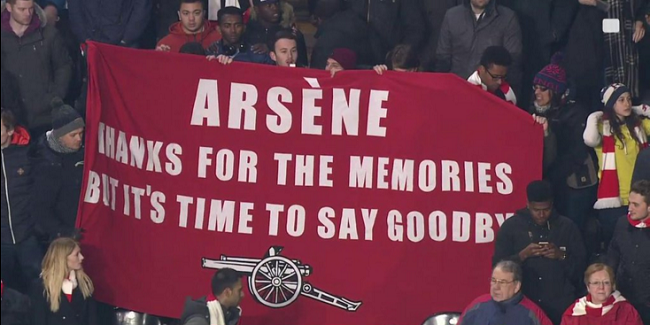 Now there are a number of valid reasons why Arsenal fans would want Wenger to move on, with the club repeating the same mistakes year-in, year-out. However, surely a 4-0 victory in the FA Cup was the wrong occasion to do it?

.@DeejayDt I’ll disrespect you all day long unfurling your muggy banner after a 4-0 win and plenty enough games left in the league. 🔔🔚

Despite the win, the Gunners still did manage to ‘Arsenal’ it up a bit, with centre-halves Per Mertesacker and Gabriel, along with sub Aaron Ramsey, all forced off with injury. Still, with a quarter-final home tie against Watford awaiting the Gunners at the weekend, a third consecutive FA Cup title is very much on.