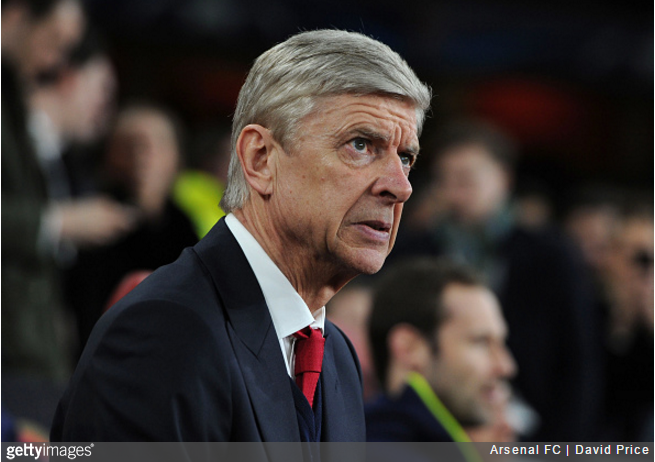 Arsene Wenger has insisted that Arsenal are in “great shape” despite getting themselves eviscerated by Bayern Munich in the last 16 of the Champions League… again.

Bayern inflicted a merciless 5-1 defeat upon Arsenal for the second successive game to send them plummeting out in the second round for the seventh year straight.

Indeed, last night’s trouncing was the heaviest defeat Arsenal have suffered at home since they opened the Emirates Stadium in 2006.

Regardless, with the fans mithering and moaning again outside, Wenger was once again resolutely obstinate in his post-match press conference.

After blaming the “absolutely unexplainable and scandalous” refereeing decision that led to Laurent Koscielny’s red card and Robert Lewandowski’s penalty, Wenger was asked if something fundamental needed to be altered in Arsenal’s psyche to prevent future embarrassment.

To which the Frenchman replied:

What needs to change at this club? What do you mean by that? I think this club is in great shape.

We are going through a very difficult situation so what needs to change is a result in the next game.

I don’t feel because we knew before the game it was difficult to qualify after the first game.

When it was suggested that losing 10-2 against Bayern was the most disappointing result of his career to date, Wenger was similarly dismissive:

I don’t feel so because we knew before the game it was difficult to qualify after the first game.

But we wanted as a minimum to go home and feel like we dealt with the situation with pride and commitment. And we did.

At the end of the night, the result will not highlight the quality of our performance, which is very disappointing.

He always knows the right thing to say, doesn’t he?

Of course, Arsenal are in rude health in many respects, with an (intermittently) entertaining team, several star names and a state of the art 60,000-seater stadium to call their own.

But in the aftermath of a truly humbling defeat against a club from the echelon the Gunners aspire to play at, those things don’t tend to come as much comfort.