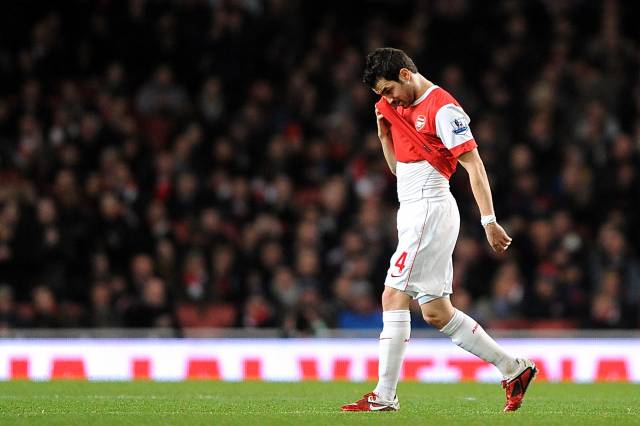 Arsenal captain Cesc Fabregas has begrudgingly accepted that he will not be taking part in the Carling Cup final against Birmingham tomorrow, admitting that his ‘heart may have been ruling his head’ when he claimed that he fully expected to overcome a hamstring tweak in time to play at Wembley earlier in the week.

“It’s hugely disappointing. Maybe my heart was ruling my head when I felt I might play. Now, reluctantly, I must accept I cannot.

“Even on Friday morning I had hoped to be involved, even if it was on the bench.

“But the boss, Arsene Wenger, is right and the most important thing is to make sure I get fit as quickly as possible to help Arsenal for the rest of the season.

“Let’s hope Arsenal could also be playing in the FA Cup and Champions League finals at Wembley. It could be a once-in-a-lifetime season.

“So while it is agonising I can’t be with the lads on the pitch on Sunday, I’ll be working hard to ensure I am part of the whole adventure.”

“I am obviously disappointed to be missing tomorrow’s game – but even though I won’t be on the pitch I will be kicking every ball from the stands.”

Bit of a kick in the taters, no?