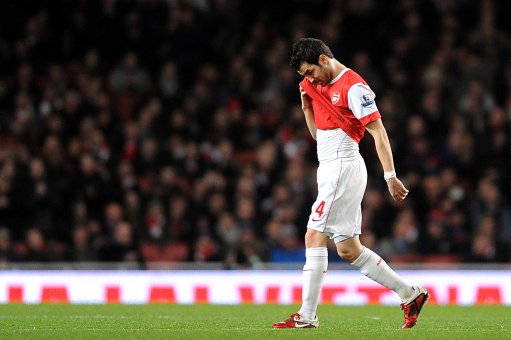 Arsenal manager Arsene Wenger has confirmed that his Cesc Fabregas is almost certain to travel to face Barcelona in the Champions League tomorrow evening, and will undergo a final fitness test later today.

Fabregas hasn’t featured for Arsenal since twanging his hamstring 14 minutes into the Gunners’ Premier League tie with Stoke a fortnight ago, though Wenger is positive that his captain will be available to face his boyhood club:

“Fabregas will have a final test today. It is 90% (certain that) he will travel and be fit. It is vital for us because he is important in the transition between attacking and defending. He is also the leader of the team so we want him there.”

Fabregas’ involvement will provide a boost to an ailing squad which will be missing both Robin van Persie, Theo Walcott and – as of this morning – Alex Song:

“Song is completely out. He had a test on Sunday morning and it was negative but Wilshere will be fit after getting a knock against Sunderland. Everybody else who played on Saturday should be available.”

UPDATE: Arsenal have since announced that both Cesc and RVP have been selected in the squad to face Barca, so you can pretty much disregard everything above!

Reckon RVP is worth the risk? Personally, we can see another ‘out for six weeks’ injury on the cards here.