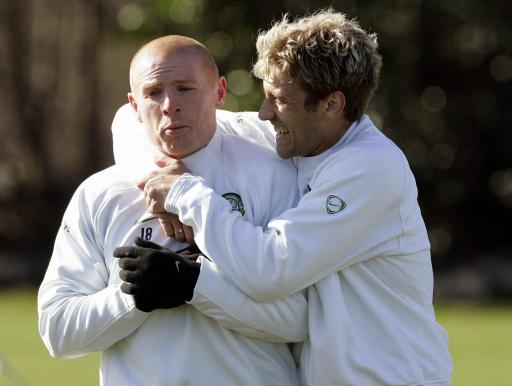 Neil and Stan, back in happier(?) times…

See? He’s not all bad. Without hesitation, Celtic manager Neil Lennon has promised to donate bone marrow to cancer-stricken former teammate Stiliyan Petrov if tests show that he’s a suitable donor after doctor’s failed to find a ‘match’ from within Petrov’s immediate family.

“I’ll do anything for Stan. They hoped his brother would be a match but sometimes they’re hard to find.

“He’s doing well but if they can find a donor it can improve his chances. There’s a donor database but I’m sure we’d all want to help by seeing if we are a match. If they want to test me, I’ll do it.”

Fantastic gesture from a man who’s not often portrayed in the best light. Nice one Neil, good on you.

Petrov is in now remission since undergoing chemotherapy to treat his leukemia after being initially diagnosed back in March, though a bone marrow transplant is one of the best ways to try and ensure that the cancer doesn’t return – not that it’s a failsafe guarantee by any means.

If you’re feeling generous, you can donate to the ‘Pedal for Petrov’ cause over at Just Giving.