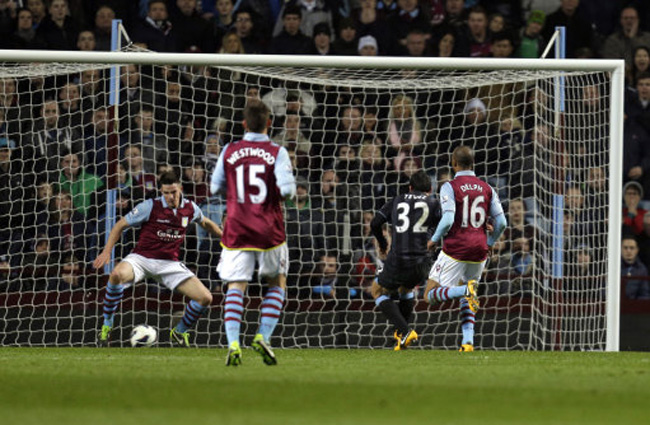 A Carlos Tevez goal on the stroke of half-time was enough to secure all three points for Man City at Villa Park in a win which closes the gap between them and leaders Man Utd to 12 points. The result also sees Villa stay stuck in the drop-zone with games starting to run out.

The game hinged on a mistake by Irish defender Ciaran Clark on the stroke of half-time, who had the ball pinched off him by Edin Dzeko, who then teed up Tevez to fire home. Although to be fair, Clark’s complaint that he had been fouled by Dzeko did seem valid.

The goal had come after the Villans had threatened the City goal on a number of occasions, with Belgian hitman Christian Benteke carrying their main goal threat.

In the second period, the visitors started to dominate, with Yaya Touré hitting the woodwork but ultimately, that first-half goal would prove enough for a City win.

Roberto Mancini’s charges close the gap on United to (a still massive) 12 points while Paul Lambert’s Villans are third from bottom, just below Wigan on goal difference.