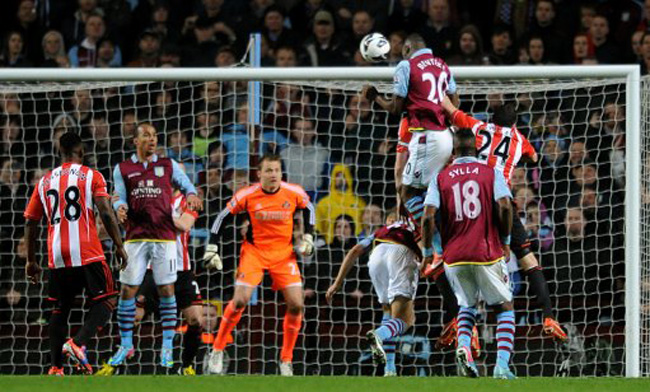 Christian Benteke may not have won any prizes at the PFA awards last night, but the Belgian bruiser has unquestionably been one of the players of the seasons, with his goals central to Aston Villa’s push to stay in the top division.

Against Sunderland on Monday night, the muscular hitman bagged a hat-trick (55 mins, 59 minutes, 72 minutes) as Paul Lambert’s side thoroughly battered the visiting Black Cats. Sunderland’s cause wasn’t helped by the second-half sending off of Stephane Sessegnon either.

Ron Vlaar had opened the scoring for the home side on the half-hour mark before Danny Rose levelled the scored soon after. However, that equaliser was to prove a false dawn for Sunderland who never got into the game.

Another impressive performer this season, Andreas Weimann, also scored on 38 minutes, as did Gabi Agbonlahor at the death to move the Villans five points clear of danger and level with Sunderland.

There were no celebratory knee-slides from Paulo Di Canio tonight as the wheels, at least temporarily, came off the Italian’s bandwagon, instead a gesture of apology aimed at the travelling fans.

Still,  neither side is safe from the drop yet.